The Future of the Affordable Care Act in Kentucky

Earlier this month, Gov. Matt Bevin called on Congress to repeal the Affordable Care Act “in its entirety.”

In his Jan. 6 letter to Republican leaders, Bevin said the commonwealth should be allowed to regulate the health insurance market under its own state authority. He also advocated for converting the Medicaid expansion to a block grant program and said the state could return to having its own high-risk pool to cover individuals with preexisting medical conditions.

Repealing Obamacare is a top priority for the Trump administration and Republicans in Congress, but questions remain as to what they would replace it with – and how that change would impact the millions of Americans and thousands of Kentuckians who now have health insurance coverage for the first time.

The Good and Bad of Obamacare
It’s been almost seven years since the Affordable Care Act became law and about three years since it was actually implemented. How you view the success of the legislation likely depends on your political affiliation.

Rep. Wuchner is a registered nurse and former hospital administrator who agrees with Bevin’s proposal to repeal the ACA and change Medicaid to a block grant program. The northern Kentucky Republican says Obamacare has resulted in more taxes, limited health coverage options, and consumers paying more out of pocket for their health care.

“The Affordable Care Act is not affordable when you have insurance providers leaving the market,” says Wuchner. “When you have a 25 percent across the board increase [in premiums], someone has to pay.”

“My biggest problem with the Affordable Care Act is it doesn’t handle the basic problems that we’ve been facing since I’ve been in this business for 40 years: affordability and accessibility,” says the retired health care executive.

Obamacare has produced positive results for the commonwealth. The rate of uninsured individuals in the state has dropped from more than 14 percent to about 6 percent. As more patients enrolled in insurance plans, Kentucky hospitals saved more than $1 billion in uncompensated medical care costs.

Rep. Marzian, a Democrat and retired nurse, says the ACA has also provided Kentuckians with access to primary and preventive care services as well as mental health and addiction recovery care that they otherwise would not have had. She says ACA provisions that eliminate lifetime caps on insurance benefits and that prevent companies from denying coverage to someone because of a preexisting condition are crucial in a state that has significant health issues.

“Before the Affordable Care Act, when we just let insurance companies run things, which the state did, they cherry-picked,” says Marzian. “So you could get a low premium, but if you had to use it, then they dropped you… or it didn’t cover anything.”

Democrats Marzian and Sen. Thomas do acknowledge that the ACA does need “tweaking” to address some cost and regulatory issues. For example Thomas says one reason premiums have spiked is because younger, healthier individuals have opted not to enroll in coverage.

The Push for Block Grants
The idea of transforming Medicaid into a block grant program is a key part of health policy promoted by Gov. Bevin as well as the Trump administration and some congressional Republicans. Under such a strategy, the federal government would give states a fixed grant each year to cover their Medicaid spending.

Many Democrats take a dimmer view of the idea.

“The block grant program would be a horrendous step back for this state in terms of dealing with our medical care needs,” says Thomas.

The Lexington senator argues that the state would receive fewer federal health care dollars under block granting, which he says would result in fewer Kentuckians being covered and fewer health care services being provided. He says block granting has the effect of legislating state “death panels” to decide whether things like transplants, ventilator care, or other expensive interventions for the aged or critically ill would be funded.

But a key benefit to block granting Medicaid, according to Wuchner, is that it gives a state greater flexibility to address the specific health challenges faced by its citizens.

“Kentucky can be quite different from… Arizona,” says Wuchner. “Our population may have some particular needs that we’re dealing with, let’s say addiction, where Arizona’s population [needs] may be aging and long-term care. And I think the state, legislature, and governor, and cabinets are best able to address those when they have the money to be able to apply it to their state where they see best.”

She says the Kentucky Cabinet for Health and Family Services along with hospitals and health providers would determine what services to cover under block granting. Wuchner says it would also allow the state to devise its own strategies to get beneficiaries more engaged in improving their personal health.

Meredith takes the block granting idea one step further, saying the money should be distributed at the county level so local health care needs can be more specifically addressed.

The Paul Plan
Sen. Rand Paul has bucked some of his fellow Republicans in Washington by arguing that they should not repeal Obamacare until an alternative plan is ready to enact. Last week he introduced legislation to replace the ACA with a plan that would eliminate the individual mandate requiring individuals to purchase insurance coverage.

Thomas says a sustainable insurance marketplace depends on having the individual mandate so that healthier people who are less expensive to cover balance out the higher costs of treating older or sicker consumers who need more care. Thomas argues millions of people would lose their insurance coverage if the ACA’s individual mandate is eliminated because there would no longer be enough healthy enrollees in the system.

Paul’s proposal would also give individuals with preexisting conditions two years to sign up for coverage, which could not be denied. After that window, people would need to find insurance on the open market. The Republican’s plan also creates a tax credit of up to $5,000 for those who contribute into a health savings account.

“Most poor people are not going to have money to put into a health savings account, they barely have money to live from day to day,” counters Thomas. “So his $5,000 tax credit is nothing more than a tax benefit to highly paid and middle income people.”

Reforming Fundamental Problems with Health Care
Sen. Meredith brings a unique perspective to the health care debate. He’s a retired CEO of Twin Lakes Regional Medical Center in Leitchfield. As an early critic of the ACA, Meredith says he opposed the American Hospital Association’s support of the legislation.

“What we’ve done is added millions of people to a fractured health care delivery system that can’t sustain itself,” Meredith says. “If you truly want to change health care, we’ve got to be more fundamental in our approach.”

The senator suggests a series of reforms that he says will help address the crisis in medical care. He calls for a reduction in bureaucracy and regulations on the health care industry, and for legislation to enact tort reform. He contends that a quarter of health care costs are related to medical malpractice issues. He also advocates an overhaul of welfare because he contends the current system is encouraging working-age adults to leave the job market.

He also says payment policies that discriminate against rural hospitals and health care providers must be eliminated. According to Meredith, doctors who practice in rural communities earn 25 to 30 percent less than their urban counterparts but face higher malpractice insurance rates. He says that leads to a shortage of doctors in small towns.

Finally Meredith says he would eliminate profiteering in health care. He says the exorbitant compensation packages of some health care executives is morally indefensible and that providers “should not make a fortune off the misfortune of others.”

Cutting Health Care Costs
The lawmakers do have a number of ideas for cutting medical costs and helping consumers save on their health care.

“I think we spend way too much money in the U.S. on health care that’s probably unnecessary,” Marzian says.

The representative encourages consumers to question the necessity of tests and procedures their providers order. For example, she contends that not everyone who has a headache needs to get an MRI or CT scan. Marzian says consumers can also ask their doctors to prescribe cheaper, generic medicines when possible. Finally she calls for tougher anti-smoking legislation in the state to help reduce the billions in health care costs spent on treating diseases related to tobacco use.

In addition to tort reform, Wuchner says health insurers should be allowed to sell policies across state lines, and smaller businesses should have greater flexibility to organize insurance purchasing pools.

Both Wuchner and Marzian say consumers need to be better educated about how to get the most from their health insurance coverage. They say too many individuals who now have coverage continue to seek expensive emergency room care instead of visiting a primary care provider. They also say consumers should seek more preventive care services and be required to better manage chronic health issues like diabetes and obesity. 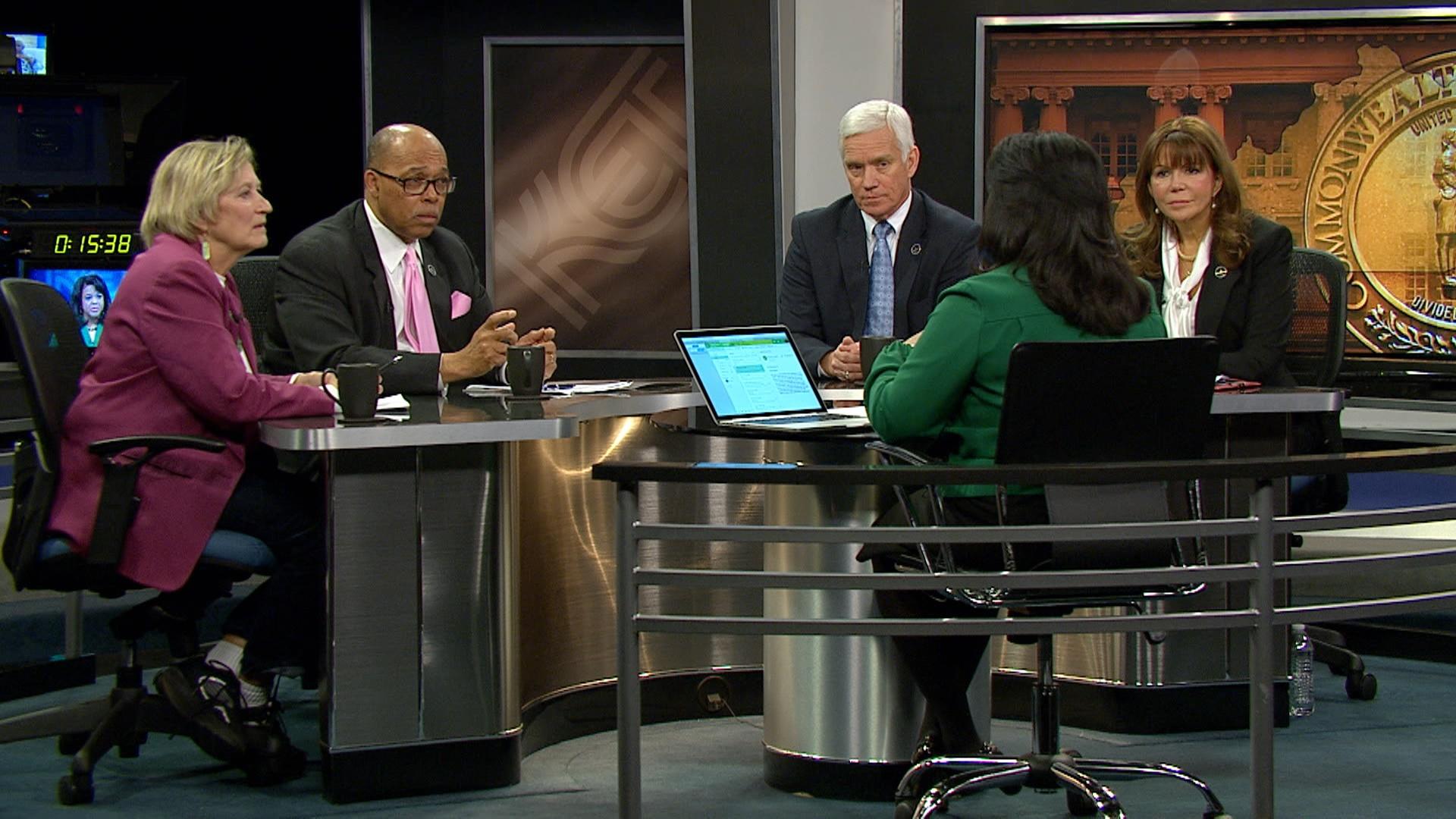