According to state legislators it was either the most successful General Assembly ever, or it was a session that took the commonwealth on a sharp turn to the right.

Republicans who are enjoying historic levels of control over state government see their recent work in glowing terms.

“This was the most productive and successful session in the modern history of the Kentucky General Assembly, says Sen. Thayer. “There was more done for Kentucky families, for our education system, and for job creators than in any session in recent memory.”

After the 2016 elections, the GOP now holds super-majorities in the state House and Senate. Combine that with a Republican in the governor’s office, and you have what Thayer calls a trifecta in governing that he says enabled the GOP to pass 25 priority bills ranging from right to work and charter schools to abortion limits and criminal justice reforms.

Thayer says the state is already benefiting from the new climate that state and national Republicans are fostering. He points to Amazon’s plans to invest $1.5 billion on a cargo hub in northern Kentucky and the April 10 announcement that Toyota will spend $1.33 billion to upgrade its Georgetown facilities.

But not everyone sees these changes as turning around the state’s economy.

“I think it’s a right-wing turn, a sharp turn to the right,” says Rand, “that over time will devalue public schools, that will erode workers’ rights, and on and on and on.”

The Democrat says the 2017 session was great for big corporations and special interests, but terrible for working-class people and small businesses. He’s also critical of how quickly Republican leadership moved significant bills through the legislative process. For example, Rand contends bills to enable charter schools and to fund charter operations only had a few hours of discussion before they went to floor votes.

Rep. Shell dismisses such complaints as a symptom of Democrats finding themselves in the minority in the House after nearly a century. He says these issues have been debated in the legislature for years, and that Kentuckians voted in Republican majorities to finally get such legislation enacted.

“There’s not hardly any bill that we passed that had not already been vetted in previous sessions by the Senate or had not been talked about on the campaign trail,” says Shell.

In addition to the high-profile measures approved by lawmakers, Shell says he’s also proud of less-heralded legislation that he thinks is just as important. He cites a bill to allow judges to place foster children with close family friends instead of only placing them with relatives. Another measure will make it easier for a child in foster care to get a driver’s license. Both measures enjoyed broad bipartisan support and have been signed into law by Gov. Matt Bevin.

Major bills dealing with K-12 education and prisoner reentry also garnered votes from both sides of the aisle. Sen. McGarvey says those pieces of legislation benefited from lengthy discussions and input from a wide range of stakeholders. But he agrees with Rand that charter schools and other issues simply didn’t get the public debate they deserved. In general McGarvey says bipartisanship has suffered under the new Republican majority.

“One of the things that was lost this session was that true sense of getting the parties together and coming up with big pieces of legislation that will move Kentucky forward,” McGarvey says.

Other Legislative Successes
The night before lawmakers returned for their final two days of work, Gov. Bevin approached Republican leaders with a request: He wanted the ability to offer $15 million to an unnamed company that might locate somewhere in eastern Kentucky.

Despite the dearth of details, Shell says the governor was “giddy” as he told legislators about the opportunity. He says the project would create 1,000 construction jobs to build a facility that would permanently employ 500 people at an average salary of $75,000 a year.

“This isn’t just a blank check for the governor to go out and use however he wants,” says Shell. “It’s going to take a $1 billion investment [from the prospective company] in order for this to trigger in that $15 million to begin with.”

Lawmakers passed House Bill 482 on the final day of the session without a dissenting vote. Thayer says such actions are not uncommon: Legislators gave former Gov. Steve Beshear similar tools for luring economic development prospects. Officials are still mum as to the specific company involved, but Thayer says there should be an announcement about the project in a couple of weeks.

McGarvey and Rand both voted for the measure, but they caution that because such economic incentives come from taxpayer dollars, they must be used sparingly and tracked carefully.

Lawmakers also approved a bill to toughen penalties against those who deal heroin and synthetic opioids, including fentanyl and carfentanil. Under House Bill 333, trafficking any amount of those substances will be a Class C felony and those convicted of dealing them must serve at least half of their sentence before being eligible for parole.

The legislature also passed and then overrode the governor’s veto of a bill to allow judges to order outpatient treatment for those needing mental health care.  House Bill 94, also known as Tim’s Law, is designed to keep people from cycling between jail, psychiatric hospitals, and the streets.

Bevin vetoed the bill, citing concerns it could infringe upon personal liberties. Lawmakers overwhelmingly voted to override that veto and three others issued by the governor during the session.

“The people of the commonwealth should be pleased to know that their constitution is working,” says Thayer. “The separation of powers is alive and well despite the fact that we hold our governor in the highest regard and agree with him on just about everything.”

Wait Until Next Year
Republicans decided to wait for the 2018 session to give further consideration to bills dealing with neighborhood schools, workers compensation, the office of attorney general, and judicial redistricting.

Thayer says GOP leaders wanted to focus on charter schools legislation and decided to shelve the so-called neighborhood schools bill for now. House Bill 151 would have allowed parents to send their children to the schools closest to their homes. McGarvey says the bill would have devastated Jefferson County Public Schools, which he says have struggled for years to make classrooms more integrated. He contends the school assignment plan for 100,000 students shouldn’t be reduced to a one-and-a-half page bill.

House Bill 296 would have limited how long companies would have to pay medical benefits to employees injured on the job. The bill met resistance from police, firefighters, and other labor interests. McGarvey says some workers comp reform is needed, but he says this legislation would’ve been too hurtful to employees. Shell says lawmakers will study the issue during the interim to find ways to reduce costs in the workers comp system.

Republicans also pulled a bill that would have limited functions of the state attorney general in a variety of ways. Thayer says recent “runaway attorney generals” need to be reined in, and that the legislature has the constitutional authority to define the duties of that office. GOP leaders have criticized current Attorney General Andy Beshear for not being willing to defend all the laws of the commonwealth, and former Attorney General Jack Conway for allowing an illegally constituted board of trustees to be seated at the University of Louisville. Both Beshear and Conway are Democrats.

House Bill 281 would have given some powers of the attorney general’s office to the governor. McGarvey says that makes no sense because attorneys general must be lawyers with at least eight years of experience while governors have no such requirement. He also says the legislation was more about the personalities of the Democrats holding that office.

Thayer says it took Senate Republicans longer than expected to hash through language that would pass that chamber, which didn’t leave the House enough time to reconsider HB 281 at the end of the session.

Finally lawmakers will also revisit a plan for judicial redistricting in the commonwealth. Senate Bill 9 would have kept the total number of judges in the state the same, but reallocated them to better cover districts with higher caseloads. Thayer says the measure was a high priority for Republicans and he is disappointed that it didn’t pass. He says the proposal encountered resistance from lawmakers whose districts would have lost judges.

Plans for Tax and Pension Reforms
Thayer says he expects the governor to call a special legislative session to consider tax and state pension issues sometime this fall. He says it will take lawmakers several months to develop a tax plan on which the legislative and executive branches can agree. Then he says Bevin should barnstorm the state to sell that proposal to voters. Thayer says that means a special session likely won’t be called until September at the earliest, and he hopes lawmakers can complete their work in five days.

Bevin raised some eyebrows during his State of the Commonwealth address earlier this year when he said Kentucky’s public employee and teacher pension liabilities total $80 billion. Most estimates have put those debts at around $35 billion. Rand says Bevin’s number is “made up.” He also criticizes the governor for seeking to contract with an outside law firm to help rewrite the state’s tax codes.

Rand says Democrats won’t support a proposal that cuts corporate taxes in favor of more sales taxes. He contends the massive pension liabilities and the potential of a shortfall in the current state budget leave lawmakers with few good options.

“There’s really only one good way to solve the pension liability and that’s more money,” Rand says. “And it’s going to take a lot more money to do that.” 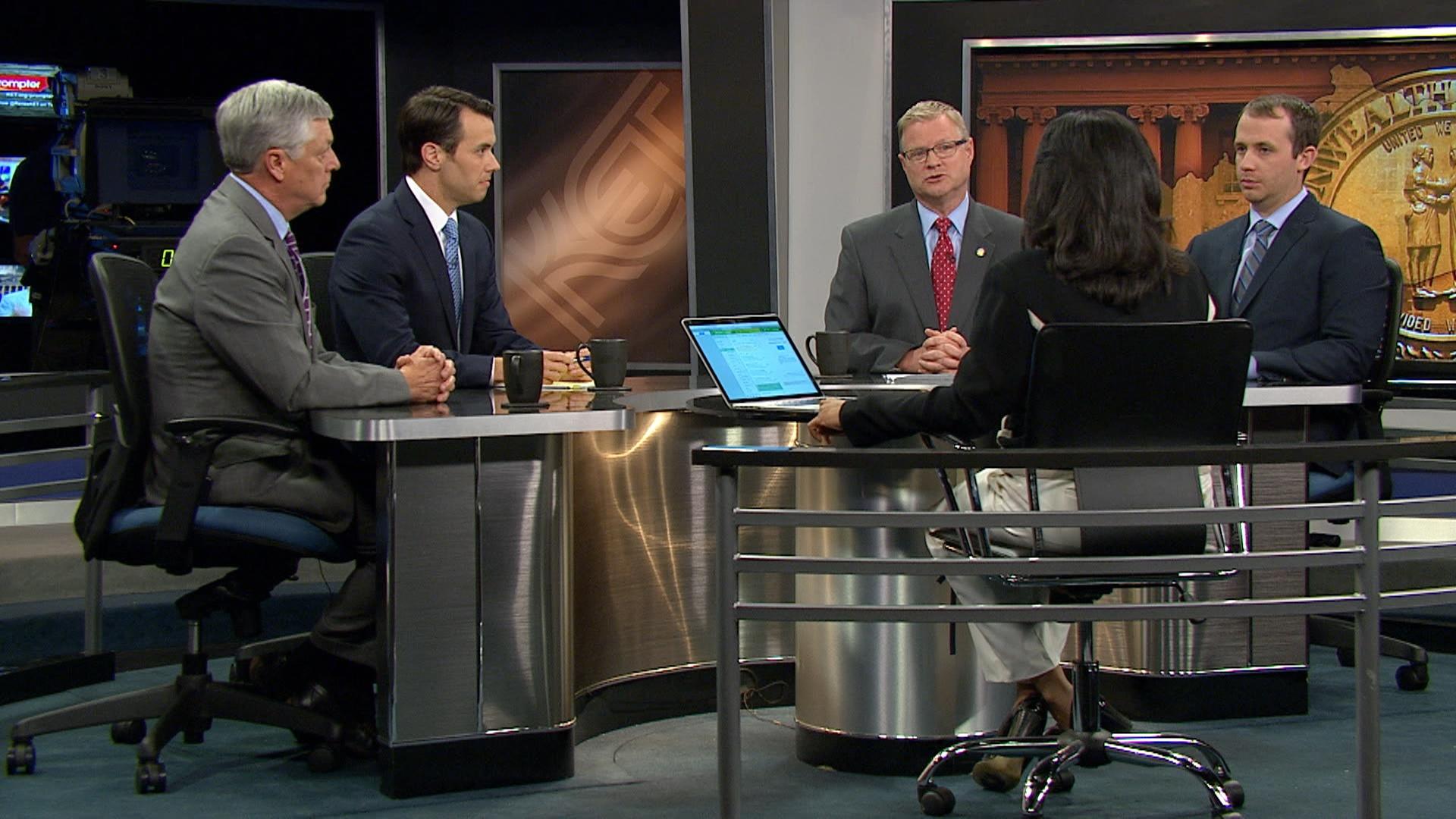