Historical horse racing (HHR), the electronic, slot machine-like games that allow players to bet on the outcomes of previously run horse races, first arrived in the commonwealth in 2012. In the intervening years, the activity has surged in popularity despite court challenges and questions about whether such games are legal under the state constitution.

The Kentucky General Assembly settled the legal questions earlier this year with the passage of Senate Bill 120, which expanded the definition of pari-mutuel wagering to include HHR machines. Now nearly 5,000 of the machines are licensed for use at Kentucky’s five Thoroughbred racetracks and two Standardbred tracks, according to Kentucky Thoroughbred Association Executive Director Chauncey Morris.

Hundreds more machines will come online when a planned Standardbred track opens in Corbin next year, and as Churchill Downs expands its gaming operations with a recently announced casino-like facility slated to open in downtown Louisville in 2023.

“These historical horse racing machines are doing so much for the industry,” says state Rep. Adam Koenig (R-Erlanger), co-chair of the General Assembly’s Pari-Mutuel Wagering Taxation Task Force. “We are quickly becoming the envy of American racing with our purses and our field sizes.”

But with billions of dollars now being wagered on HHR in Kentucky, some are concerned that the state is not getting a fair share of the proceeds. Kentucky Center for Economic Policy Senior Fellow Pam Thomas says about 91 percent of the handle goes back to bettors, while tracks keep the rest and pay a 1.5 percent tax on the total amount bet.

“I don’t think that the General Fund of Kentucky is reaping the benefit that it should from these machines,” says Thomas. “I do think that we can collect more in state taxes and still have all the wonderful benefits for the [horse] industry.”

Thomas says other states tax their gaming operations at higher rates than Kentucky, which means the commonwealth is losing out on millions of dollars in potential revenues. Even the effective tax rate touted by the Kentucky Horse Racing Commission of 17.4 percent is still lower than the rate in other states. For example, Thomas says the effective rate on electronic gaming devices in Ohio is 33 percent; in West Virginia it’s 53.5 percent.

But HHR advocates say this new method of playing the ponies needs time to mature before it faces greater tax obligations.

“I think we need to be very careful when we talk about increasing taxes,” says Senate Majority Floor Leader Damon Thayer (R-Georgetown), who along with Koenig is co-chair of the Pari-Mutuel Wagering Taxation Task Force. “This industry is heavily taxed and paying its fair share.”

Thayer contends the industry not only pays the taxes on betting, but also on payroll, sales, and property in addition to the purses paid to winning horsemen and women. By his estimation, that puts Kentucky’s effective tax rate on HHRs at just over 32 percent. He also argues it’s unfair to compare the tax rates paid by horse race tracks to rates paid by traditional casinos.

“They pay out a lot less and the house keeps a lot more,” says Thayer. “Those casinos also don’t have the high brick-and-mortar costs and the high labor costs that our horse tracks have.”

Although part of the state’s agricultural economy, Morris says the horse industry is taxed in ways that other livestock and commodity producers aren’t.

“We are paying taxes on feed, fencing, and equipment that other parts of the farm sector do not pay,” says Morris.

Thomas says regular operating expenses shouldn’t be included in an effective tax rate calculation. She says that advocating for tracks to pay more in taxes doesn’t mean that she fails to appreciate the role of Thoroughbred racing in Kentucky.

“These things are not mutually exclusive,” says Thomas. “Asking the tracks to pay more in taxes is not going to kill the industry, it is not going to stop historic horse racing.”

SB 120 didn’t get into the issue of taxes on HHR. Senate Minority Floor Leader Morgan McGarvey (D-Louisville) says including such a revenue provision in a non-budget year would have created a higher threshold for passage, which he contends likely would have doomed the measure to failure in the state House of Representatives. But he says even some horse advocates acknowledge the tax rate needs to be addressed.

Lawmakers formed a task force to review pari-mutuel wagering taxation, which has met throughout the year. Louisville Democratic Rep. Al Gentry, a member of the task force, praises Thayer and Koenig for bringing a range of information to the panel for discussion. He says taxes on pari-mutuel wagering should be updated across the board, instead of having different rates for different types of pari-mutuel bets. He says House Democrats want a higher tax rate, but differ on the specific number.

“Let’s make sure that we come to the optimum rate, whatever that is, but let’s also look at the allocations, says Gentry. “How are we reinvesting that tax revenue that we are collecting?”

Gentry wants a portion of the tax proceeds allocated to address gambling addiction. He wants the communities that host HHR venues to get a share as well. In Wyoming and Virginia, the other states that currently have HHR gaming, he says local governments split HHR tax revenues with their state governments.

Thayer says he agrees with supporting the Kentucky Council on Problem Gambling, but he opposes levying taxes to benefit local governments. He says he’s heard no call for that idea from either the Kentucky League of Cities or the Kentucky Association of Counties.

Even while the task force continues its discussions, Rep. Kim King (R-Harrodsburg) has prefiled legislation to raise the tax rate on HHR and on advance deposit wagering (ADW), in which bettors must fund their account before they can place a bet online or by phone. Koenig says the Kentucky’s current rate on ADW is the lowest tax on any form of betting in the state.

“There’s a lot of money being left on the table that way,” says Koenig. “That’s the growth area and it doesn’t make sense that they’re not taxed the same to start with.”

But Thayer contends implementing a higher tax rate doesn’t guarantee the state more revenues. He says it could result in fewer tax dollars if fewer people bet as a result. The Republican argues that keeping a low tax rate on HHR will generate more revenue for the state and enable the industry to grow faster.

“We’re going to get more revenue because more machines are coming online, which is going to lead to more wagering [and] more tax revenue,” says Thayer. “Within two years, Kentucky, I believe, will pass much larger states like New York, California, and Florida… to become the number one horse-racing circuit in America.”

“The reason that the field size is superior here in Kentucky last year to all other states and Canada is because of the prize money on offer,” says Morris. “We are attracting better horses, we are employing more individuals.”

Thayer says the horse industry already employs 80,000 Kentuckians. But Martin Cothran of The Family Foundation says that doesn’t mean all of those people are benefitting from the profits and higher purses generated by HHR.

“It’s an industry where the money goes to people who are very wealthy and trickles down to people who don’t make nearly that much money,” says Cothran. “The money is going, particularly with the rates we’re charging on taxes now, to very wealthy corporations like Churchill Downs where the CEO makes $10 million a year.”

The Family Foundation challenged the legality of HHR for years, arguing the games do not qualify as pari-mutuel wagering.

“These machines are really slot machines with horse pictures on them,” says Cothran.

The Kentucky Constitution allows only three forms of gambling: the state lottery, charitable gaming like church bingo, and pari-mutuel wagering. Cothran continues to argue that HHR should not qualify as pari-mutuel wagering, even with the changes made by SB 120, and therefore remains unconstitutional in the state. He says the Family Foundation is still considering its options for future legal challenges. In the meantime, he says it’s reasonable to question whether Kentucky’s horse industry should pay more in taxes.

On the other side of the spectrum, Gentry and McGarvey say the debate over HHR should be expanded to include sports betting and full casino gambling.

“Unfortunately, I think we’ve allowed Kentucky to basically have slot machines and not casinos with historical horse racing,” says McGarvey. “But I think there is a chance to get sports gaming in Kentucky.”

Koenig proposed a sports betting bill that garnered strong Democratic support in the 2021 General Assembly. But that proposal was tabled in favor of SB 120 on historical racing games. Numerous efforts to legalize casinos either through legislation or constitutional amendment have stalled in the past.

McGarvey contends that’s a missed opportunity for the commonwealth since several neighboring states already have casinos that are frequented by Kentuckians.

“We are watching carloads of cash drive across the bridges on a daily basis,” the Democrat says. “We could be having a full-on casino conversation where we could be investing in the horse racing industry…. while also doing something like funding public pre-school so that all of our kids have early childhood education.”

Thayer says he supports sports betting, but he says he considers further discussions on casino gambling a waste of time. He also remains firmly opposed to raising taxes on the state’s race tracks and HHR operations.

“I don’t think the case has been made to raise tax rates on historical horse racing,” says the Republican. “We should be applauding its growth and supporting the jobs it provides to 80,000-plus families in in the commonwealth.” 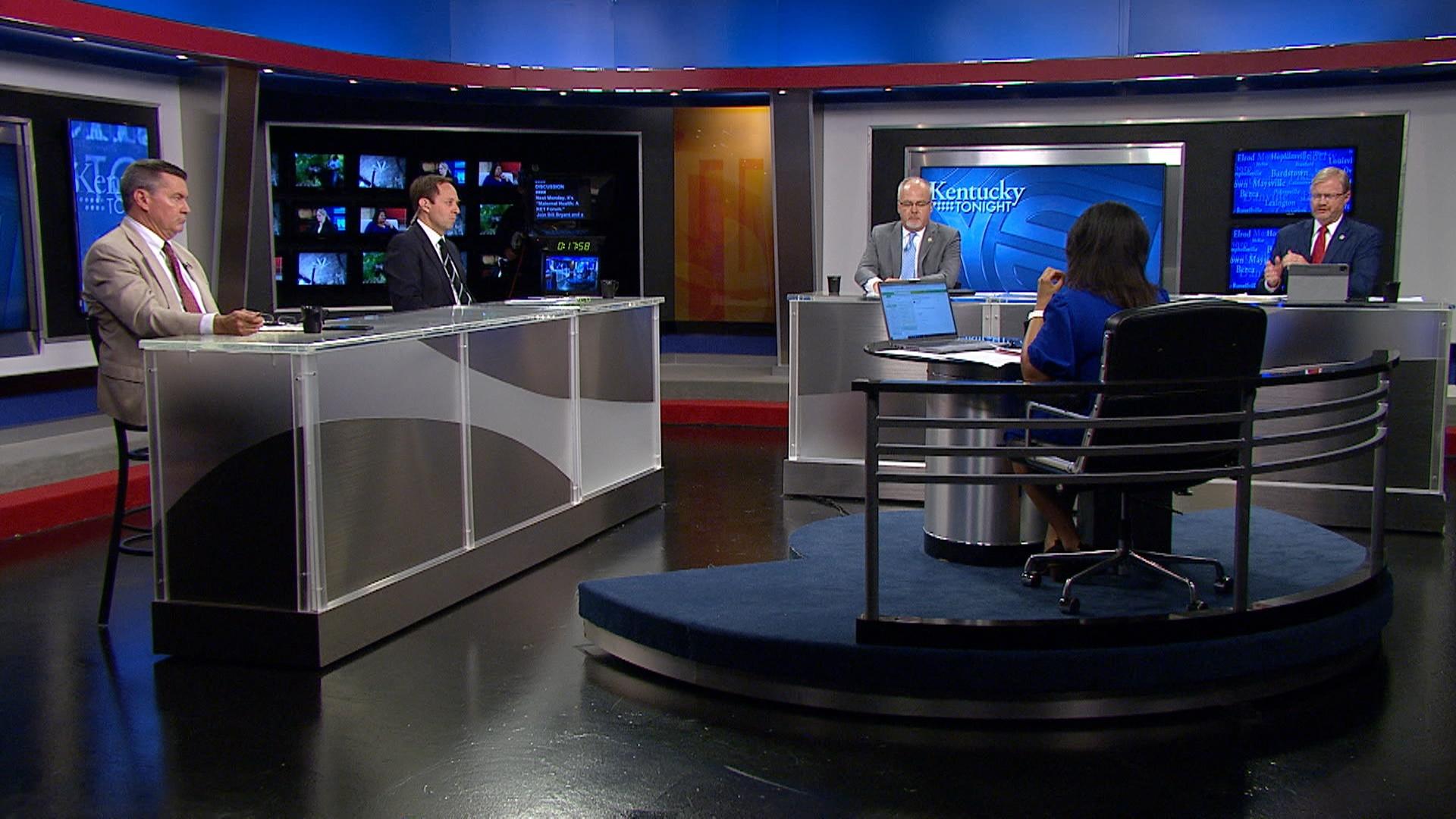