That’s what Gov. Matt Bevin and Republican legislative leaders are calling their proposal to overhaul the state pension systems, maintain the benefits promised to current workers and retirees, and ultimately erase an estimated $60 billion in unfunded liabilities in those plans.

But Democrats and some state workers and public school teachers argue that the plan is breaking promises and could hurt Kentucky’s long-term ability to lure highly qualified individuals to public sector jobs.

An Overview of the Plan
The Republican reform plan leaves most of the pension features in place for those who are already retired and for current public employees and teachers. Consultants advising the Bevin administration had previously recommended increasing the retirement age and clawing back cost-of-living adjustments (COLAs) already given to retirees, but Republican leaders rejected those options in their plan.

“The goal here is to save the systems and keeping the promise made to our current retirees and employees while protecting the taxpayers from a looming fiscal calamity that we face if we do nothing,” says Sen. Damon Thayer. “This plan will absolutely save money.”

The biggest change comes for future public employees. Teachers and non-hazardous state workers hired after July 1, 2018, will not get pensions but will be placed into a new defined-contribution plan that Gov. Bevin has often described as a 401(k)-type plan. Thayer says it will actually be a 401(a) plan, which he says is similar to a 401(k) but is only offered to government employees and their participation is mandatory.

Rep. Chris Harris contends defined-contribution plans aren’t as attractive and are riskier than defined-benefit plans. He says that will make it harder for the state and local governments as well as school boards to recruit and retain highly qualified employees. Plus, public school teachers will still not be eligible for Social Security under the reform plan.

“Teachers would not have anything except that [defined-contribution plan] when they retire,” says Harris. “So if the market fell out and they lost their 401(a) or 401(k), then they would have nothing.”

Harris says the combination of a smaller retirement under a defined-contribution plan plus the lack of a Social Security safety net will make it so hard to attract teachers to classrooms that the result will be the end of “public education in Kentucky as we know it.”

Thayer dismisses that notion as scare tactics and demagoguery.

“The defenders of the status quo are going to continue to try to gin up this kind of fright and paranoia,” says Thayer. “We are making the tough decisions here not based on the next election cycle or the next two-year budget plan, but for the next 30 years so we do not saddle our kids and grandkids with mountains of debt.”

He counters that the 401(a) plan will be “very generous.” He says people in the private sector are used to 401(k) benefits and future public employees will grow to embrace them as well. Thayer adds that younger workers value the greater flexibility that defined-contribution plans offer over traditional pension plans that can lock an employee into working for the same employer for decades.

As for attracting good educators, Rep. Jerry Miller says lawmakers are open to changing the retirement program in the future if recruiting and retaining teachers becomes a problem.

Changes for Those Already on the Job
Current workers will experience several important changes. The proposal places all current and future legislators into a new defined-contribution plan under the jurisdiction of the Kentucky Retirement Systems. And lawmakers will no longer be able to enhance their pensions by taking higher paying state jobs after leaving the legislature.

Thayer, a Republican, opposes such “spiking” by legislators and says he regrets voting for the 2005 bill that allows it to occur. Sen. Dennis Parrett, a Democrat, says the first bill he filed when arriving in Frankfort in 2011 was to repeal rich legislative pensions.

“Legislators do not deserve a better plan than other state workers at all,” Parrett says.

All public employees, teachers, lawmakers, and judges will now have to contribute 3 percent of their salary to fund the retiree health care programs. Miller explains that each of the state’s eight pension plans includes a pool of money to pay retirement benefits and a pool to fund health care for retirees. Those health care pools also face unfunded liabilities, according to Miller. For example the Kentucky Teachers’ Retirement System (KTRS) health care pool had a $3 billion unfunded liability last year.

Miller says asking workers to contribute more to retiree health care benefits is part of the shared sacrifice the Republican plan asks of all public employees.

“At a certain point you’ve got to subordinate individual self-interest for the common good – we are a commonwealth,” says Miller. “This is critical. This is $60 billion in liabilities we have. That is almost six times our general fund revenue each year.”

Another change involves current employees who are nearing or are currently eligible for retirement. They can retire and draw their pensions or they can continue to work. If they opt to stay on the job, they will be placed in the 401(a) plan instead of continuing to contribute to their existing pension plan. Teachers who are already eligible for retirement do have the option to work and keep building their pensions for up to three additional years. That provision is designed to prevent a mass exodus of 14,000 educators who could retire at the end of this school year.

Finally future COLAs scheduled for current retirees in KTRS will be suspended for five years. And those teachers who retire in the future won’t receive COLAs for the first five years of their retirements.

“To me we’re just going back on promises that we’ve made,” says Harris.

“If we want to keep the promise that we made to our teachers and to our state and county employees, we’ll step up the plate as the legislature and we’ll fund the retirement systems the way they should’ve been funded,” Harris adds.

What About Revenues?
The Republican plan does not address revenue issues for the pension systems, but it will statutorily compel the state to make the full actuarially required contributions (ARC) each year. Those ARC payments will now be calculated based on a level-dollar funding formula rather than as a percentage of payroll, as has been done in the past. Miller says that should eliminate the unfunded liabilities across the state pension plans in 30 years.

An actuarial estimate of the fiscal impact of the plan is expected shortly after the full legislation is released, says Thayer. He says if lawmakers fail to pass the plan, the pension systems would need an extra $2.2 billion in the new state budget. That would force double-digit cuts across all of state government and force a 15 percent reduction in K-12 education, according to Thayer.

But he and Miller estimate that if passed, the plan should save taxpayers about $500 million. Thayer concedes, though, that the state will face budget cuts in the next biennium even if lawmakers enact pension reform.

The choice shouldn’t be between passing this plan or doing nothing, argues Harris. He and Parrett say the General Assembly should simultaneously tackle tax reform to address the revenue side of the pension equation. Thayer responds that Kentuckians don’t want higher taxes. The better path, he says, is to enact tax codes that improve the business climate, which he contends will foster job growth and generate more tax revenues for the commonwealth.

The governor has yet to set a date for a special legislative session to address the pension reform plan. Thayer says the call could come in November or even December, but he expects legislative committees to hold public hearings on the proposal even before lawmakers convene for the session.

Harris says he intends to vote no on the current reform plan and he also opposes spending thousands of dollars to hold a special session. If the Republican majorities in the House and Senate have enough votes to pass the reforms, which Thayer believes is the case, then Harris argues they should simply approve the plan during the first week of the 2018 regular session.

Parrett says he’s eager to see more details of the actual legislation but he describes the basic framework as a “good start.”

“Is there some good things in there? Absolutely,” says Parrett. “But there are problems in here that I hope we can get worked out and it may take some time.”

Like his fellow lawmakers, Miller says he’s received hundreds of calls about the proposal. He says many callers oppose certain aspects of the plan and threaten to vote against him for re-election should he support the reform effort.

“My response is, if I don’t have the courage to make the right vote for Kentucky, I don’t deserve to be re-elected,” Miller says. 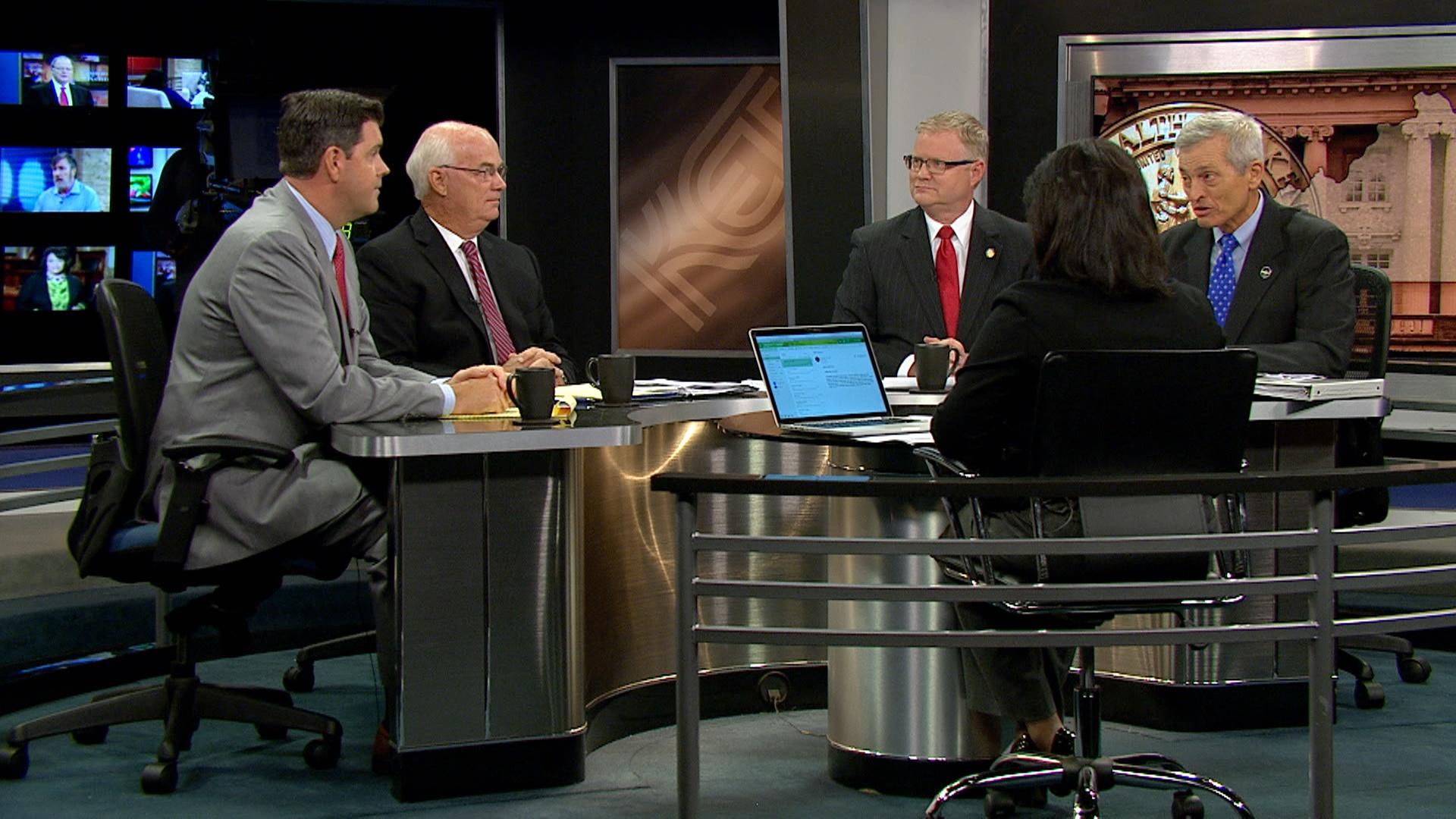