A consultant’s report that suggested sweeping changes to Kentucky’s public pension systems has deeply unsettled retirees and caused many state workers and teachers to consider retiring sooner than they might have planned.

Frankfort Republicans say the recommendations from the PFM Group are merely a framework for overhauling the state retirement plans that are mired in unfunded liabilities totaling at least $35 billion. And legislators of both parties pledge they’ll preserve the benefits already promised to current workers and retirees.

But that still leaves members of the various retirement systems as well as taxpayers faced with shouldering those debts wondering exactly what lawmakers will do to address the crisis.

The Battle Over Benefits
The PFM Group’s 113-page final report has drawn mixed reaction from lawmakers. Sen. Joe Bowen says PFM consultants took a conservative view of Kentucky’s pension systems and offered a thorough plan for addressing the crisis based on that perspective. He says lawmakers won’t embrace every recommendation in the report but will use it as a framework for drafting their own reform package.

Even Gov. Matt Bevin, whose administration commissioned the review, won’t adhere to every recommendation, says Rep. Jerry Miller. He says some of the options offered in the report aren’t legally or politically possible.

One such suggestion would have the state rescind (or claw back) cost-of-living adjustments retirees earned between 1996 and 2012. That would shrink benefit payments to some pensioners by as much as 32 percent, according to the Kentucky Center for Economic Policy.

Although such a clawback would immediately reduce the unfunded liabilities in the systems, Bowen says the action would not be “humane” to retirees who have grown accustomed to a certain level of monthly income.

Rep. Rick Rand says his fellow Democrats also won’t accept the idea of clawing back benefits already given to pensioners.

Tinkering with benefits that have already been earned could violate the inviolable contract between state and local workers and their employers, according to Sen. Morgan McGarvey. He contends that contract covers cost-of-living increases as well as the number of years an employee must work before being eligible for retirement. Another PFM Group recommendation would increase the retirement age for non-hazardous state workers to age 65. Hazardous workers such as police and firefighters would have to work to age 60.

“Short of going into bankruptcy or negotiating with consideration a new promise,” McGarvey says, “we can’t take those benefits and change them.”

Pensions Versus 401(k) Plans
The PFM Group also recommends a strategy that Gov. Matt Bevin has advocated for several years now: Place new hires into a 401(k)-type plan (also called a defined-contribution plan) in which the employee and employer both contribute to the plan and the employee receives a retirement benefit based on the market value of their investment portfolio.

In traditional pension plans, often called a defined benefit, only the employer contributes to the plan and employees are promised specific benefits upon retirement. (Kentucky operates a hybrid pension arrangement in which both the employer and the employee contribute to the system.)

The recommendations also call for newly hired teachers to be placed in a defined-contribution plan and receive Social Security, which educators currently enrolled in the Kentucky Teachers’ Retirement System are not eligible to receive.

Bowen, Miller, and other Republicans argue that defined-benefit plans are too expensive and too risky because they depend on a variety of financial assumptions that must be met to keep those plans solvent. If plan managers fail to meet assumed investment returns, inflation rates, and other targets, they may not have the funds to pay out the promised benefits.

“We don’t know how the market is going to react even if we have the most astute investors in the world,” Bowen says. “I wish it did work… but it’s unrealistic because these assumptions are too challenging and you can’t hit them – history tells us that.”

Miller says past mistakes such as using flawed assumptions and failing to make the actuarially required contributions have put the state in a position where lawmakers must consider switching to a defined-contribution plan.

“Had we funded it appropriately, absolutely we could keep a defined-benefit plan, but we didn’t,” says Miller. “Decisions were made over a 20-30 year period that underfunded it.”

But switching to a defined-contribution plan comes with its own set of risks and costs. McGarvey says says enrolling new hires into a 401(k)-type retirement would put the existing pension plan and its members in danger because those new employees would no longer be paying into the old system. As funds in the old pension system dwindle, plan managers would have to seek low-equity, low-yield investments to maintain the liquidity they’d need to pay out benefits.

With both those factors shrinking the available pension funds, the state (and taxpayers) would have to pay in even more money to keep the old pension plan afloat, says McGarvey.

“The cost of doing that is, in my opinion, provably more in the short term and potentially the very long term,” says McGarvey.

In switching to a 401(k)-type plan, the PFM Group suggested that employees would be able contribute up to 6 percent of their salary and the state would put in up to 5 percent. But McGarvey warns that’s not nearly enough of a match to lure private-sector workers to government jobs. He contends the match would need to be at least double that, which would further increase costs for the commonwealth.

Rand also fears that defined-contribution plans like a 401(k) might leave state workers with less retirement funds than they would need to maintain the standard of living they expect to have.

Local Governments Want a Separation
A number of city and county government leaders want the County Employees Retirement System (CERS) separated from the Kentucky Retirement Systems (KRS). Bowen sponsored legislation in the 2017 General Assembly to split the two systems because he says CERS has more members and more assets compared to the overall state system. CERS is about 60 percent funded while KRS has only about 16 percent of the funding it needs.

New financial assumptions approved by the KRS board earlier this year could cause city and county government pension payments to jump by as much as 60 percent next fiscal year, according to a letter state Budget Director John Chilton sent to local government officials last week. For Metro Louisville alone, that could mean an additional $44 million in pension payments, says McGarvey.

Rand questions why the Bevin Administration sent that letter when there’s not even consensus on how much the unfunded liabilities are. The estimates range from around $35 billion to more than $80 billion, depending on the financial assumptions used to calculate them.

“I fear that letter was sent out to fan the flames, to get people nervous,” says Rand. “There is a lot of anxiety and angst out there amongst retired employees, amongst mayors and county judges… I don’t think it serves any purpose to stir that pot unless you know exactly what you’re talking about.”

McGarvey voted for Bowen’s bill to separate the two plans. Miller says he believes a split between CERS and KERS is the right thing to do eventually but not immediately.

Other Options
While some lawmakers want to divorce KERS and CERS, Miller wants to merge the pension plan for legislators into the system for public employees.

“It is an embarrassment that the legislative plan is the best funded and I think the past legislatures that have let that run merrily along should be ashamed,” says Miller. “Legislators need to be treated exactly the same as KERS non-hazardous employees.”

Since he doubts many fellow lawmakers would endorse such a merger, Miller recommends that the state stop paying into the legislators’ plan until it reaches the dire funding level that KERS currently has.

In past years, House Democrats have proposed issuing pension obligation bonds to generate funds for the ailing retirement systems. The PFM Group did not recommend a general use of such bonds, but did say obligation bonds could be issued to help fund a buyout of those state employees who might opt to move their pension assets into a 401(k) plan.

“The whole concept of borrowing money to pay a debt just doesn’t compute with me,” says Bowen. “If we would have engaged in the pension obligation bonds when it was brought up four years ago… we would have lost $300 million in the market.”

Another option for lawmakers is to increase tax revenues so they could allocate more money to the retirement plans. Gov. Bevin originally proposed one special legislative session to address pension and tax reform simultaneously. The current plan is to tackle pensions first then look at tax reform sometime next year. Republicans argue that will give lawmakers a better idea of how much additional revenue the state will need to meet its pension obligations. Democrats say they can’t fix the pension crisis without first knowing where the money will come from.

Whenever legislators get to it, the tax debate will be contentious. Bevin has already said he won’t propose expanded gaming or legalizing and taxing marijuana as options for boosting state coffers. Rand says gaming should be considered because it could generate $550 million in licensing fees and $250 million in annual revenues for the commonwealth.

“I don’t care if the governor said it’s not on the table, it needs to be on the table because if all we’re going to do is raise the sales tax on working people, I just don’t know if that’s going to fly,” says Rand.

A special session on pension reform is now expected in early November. Bowen says lawmakers and the public will have ample opportunity to review the reform plan before it comes to a vote. 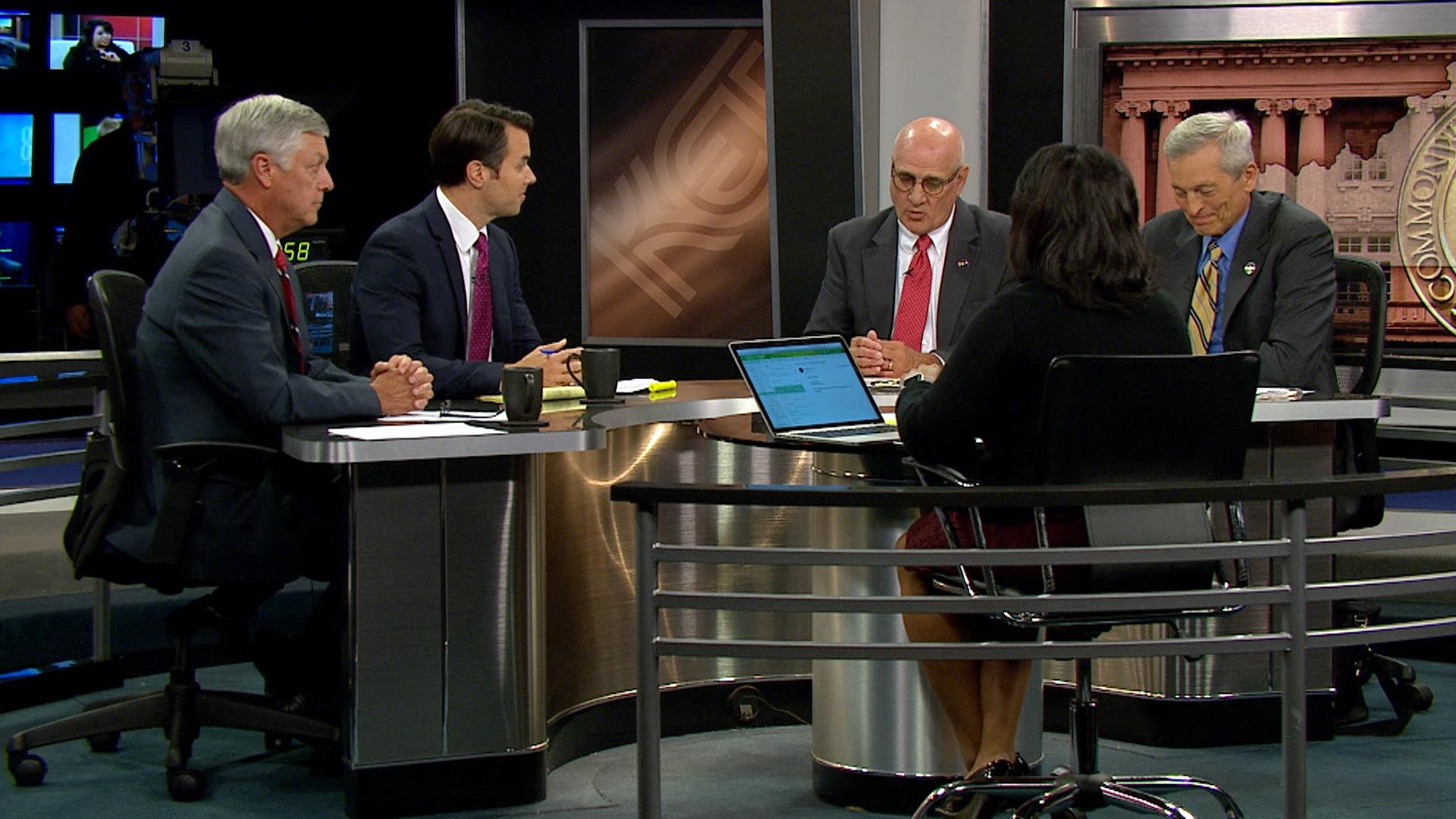