Even as the commonwealth struggles to pay for public employee pensions, education, and health care, another vital sector faces its own set of challenges.

But the money to fix them isn’t available. According to state Senate Transportation Committee Chair Ernie Harris (R-Prospect) the infrastructure needs are always going to be greater than the state has resources to fund.

A Tight Budget Gets Even Tighter
Transportation projects in the state’s two-year road plan are funded by a combination of state and federal dollars: about $2.3 billion in federal funding and $700,000 in state funding for the current plan, says Sen. Harris. Those funds come from gas taxes along with other user fees such as licenses and registrations. The state funds are split between state road projects and local city or county projects.

But with cheaper gas prices, more fuel efficient cars, and people generally driving less, gas tax receipts have been flat or on the decline. That gives states including Kentucky fewer dollars to build new roads and bridges and maintain existing structures.

Because the state’s gas tax was pegged to the average wholesale price of gas, gas tax revenues would fluctuate. To keep the revenues from falling too much as gas prices dipped to $2 a gallon and lower, the 2015 Kentucky General Assembly enacted a floor in the gas tax, saying it could not drop below 26 cents per gallon no matter how cheap gas might become.

Another problem looms for Kentucky transportation officials, says Harris. Starting in 2020 the state road fund will have to pony up as much as $120 million to match a portion of the federal funding that goes to federal road projects in the commonwealth. Previously the state was able to avoid the direct matching payments through credits Kentucky received by collecting tolls on some roads.

“That means all the state roads, which are mostly rural, are going to have even less money to divide up,” says Harris.

The Search for More Revenues
Harris contends he can easily make the case for increasing the gas tax. He says that every penny of gas tax generates about $30 million for the road fund. The senator says the state also could follow the lead of Georgia and Florida and tie the gasoline tax to the consumer price index so the tax rate would change with inflation.

But what if your car uses little or no gasoline? Santoro has prefiled legislation to charge drivers of hybrid and fully electric cars an annual registration fee ranging from $50 to $150.

“They like driving on our roads and I think that they need to have some skin in the game and pay for it,” Santoro says.

Another option is to levy a tax based on vehicle miles driven each year. Oregon is piloting such a program that will charge drivers 1.5 cents a mile. (Any gas taxes they pay at the pump will be reimbursed.) Participates in the pilot program will receive an in-vehicle data recorder that automatically monitors the driver’s mileage. Harris says he understands that some Kentuckians might be leery of such technology.

The state could also revoke the relatively new tax credit that allows people to subtract the value of a trade-in vehicle from the value of a new vehicle they purchase. But Harris says changing how Kentucky taxes its drivers would have to be considered as part of an overall tax reform proposal.

And then there’s the option that completely avoids the tax issue: Tolling.

Santoro says northern Kentuckians have resolutely opposed tolls even as a means to fund a new Ohio River bridge to Cincinnati. Meanwhile two new bridges from Louisville to southern Indiana are tolled to help pay off the construction bonds and provide for future maintenance. Santoro says those fees add up for commercial truckers and he fears those costs will get passed on to consumers in the form of higher prices.

In western Kentucky, Sen. Dorsey Ridley says his constituents are used to tolls since the parkways there tolled drivers for years. He sees tolling as a viable option to fund a new bridge that would carry Interstate 69 traffic from Henderson to Evansville, Ind.

“We think in west Kentucky we could handle a toll,” Ridley says. “Do we like it? No, but the transportation people would really like to move their goods more rapidly.”

Despite the opposition that tolling usually evokes, Rep. John Sims says the practice is effective and equitable.

“Tolling, it works,” says Sims. “It’s a users fee – just not people in Kentucky pay for it but everybody traveling through the state will help pay for that road [and] help maintain that road.”

Other Transportation Issues
New self-driving vehicles will create a range of issues for federal and state officials. The U.S. Department of Transportation recently released voluntary safety guidelines for vehicles that use autonomous technologies. Harris says it will be up to the federal government to ensure that the vehicles are safe to use, while states will have to ensure that drivers use them safely.

Ridley says the technology presents new liability issues for automakers, which will change how autonomous vehicles are marketed to consumers.

“If there was an accident, there would be lawsuits, so instead of selling cars, you’ll find them being leased,” Ridley says. “It’s an exciting area… we’re all watching it very closely.”

As more bicyclists travel Kentucky’s roadways, lawmakers have made several attempts to protect their safety. Harris says he wants legislation that would require cyclists to have flashing lights on the front and rear of their bicycles to improve their visibility to drivers. Ridley says vehicular drivers have to learn to share the road with bicycles but that ultimately, cyclists must be responsible for their own safety.

Ridley also wants the state to return to sending reminder notices to drivers when it’s time to renew their licenses. Kentucky ended that practice in 2016, which will save the Transportation Cabinet $250,000 a year, says Ridley. But he argues that many people then forget to renew their licenses and then face a citation for an expired license. Harris says an email reminder would work as well as a mailed renewal notice and be cheaper.

Kentucky is awaiting word from the U.S. Department of Homeland Security on its request for another extension from Real ID enforcement. Some state lawmakers resisted the new, stricter security measures for drivers’ licenses and other forms of state-issued identification, saying the new rules could impinge on personal privacy. Harris says the Real ID requirements were an “overreaction” to the 9/11 terrorist attacks.

Under a state law passed earlier this year, Kentuckians will be able to choose whether to get a Real ID-compliant driver’s license or a standard license. Those who opt for a standard license will have to show additional identification to board domestic airline flights or visit government facilities in the future. Harris says Real ID licenses won’t be available in the state until 2019, which is why Kentucky has had to request the extension from Homeland Security.

Local and state transportation officials are developing their list of prioritized projects to send to Gov. Matt Bevin and lawmakers for their consideration as they develop a new two-year road plan during the 2018 General Assembly Session. Harris says the various transportation committees will focus on projects that promote safety and economic development. They will also try to maintain funding for projects that are already underway.

“There’s been a sea change in Frankfort,” Harris says. “You have a different party in charge of the House, [Republicans] are going to develop the road plan for the first time. There will be priority changes because of that.”

And it’s not just roads. Sims says lawmakers also have to consider funding for other transportation infrastructure like airports, river ports, and railroad crossings. About $80 million in transportation money also goes to fund the state police force, according to Ridley.

In the end, Sims says he understands the frustration of drivers who want the roads they travel every day to be repaired sooner rather than later.

“It’s government, so it takes time to get stuff done,” says Sims. 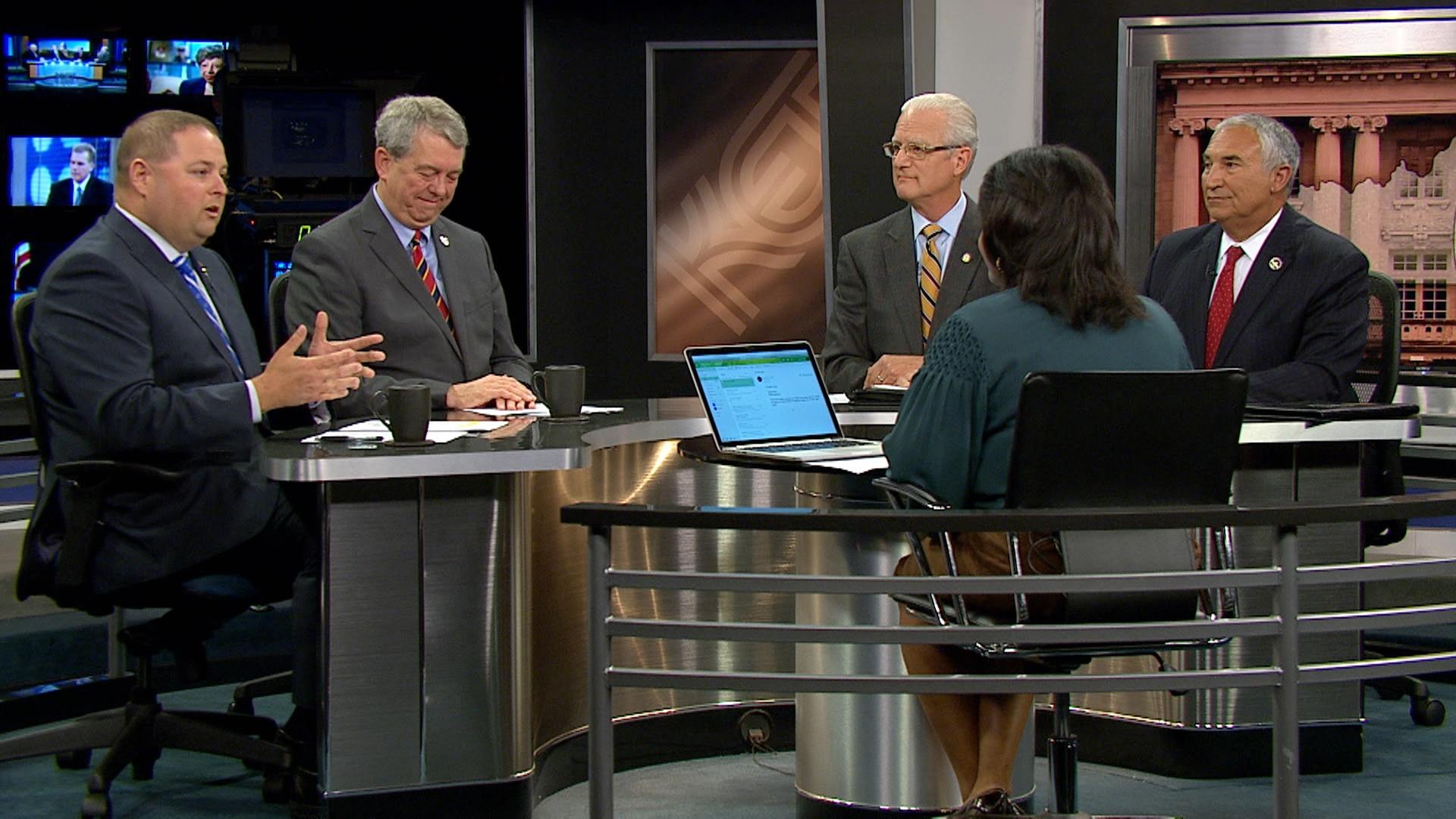