Kentucky Tonight hosted the first in a series of discussions with candidates running for federal office in the 2020 primary elections.

C. Wesley Morgan of Richmond has degrees from the University of the Cumberlands and Eastern Kentucky University. The Republican has worked as an accountant, IRS agent, Bureau of Alcohol, Tobacco, and Firearms investigator, and retail business owner. Morgan served one term in the state House of Representatives.

Morgan contends that McConnell is not a true conservative, saying the Senate Majority leader has sided with Democrats to limit gun-owner rights, to allow warrantless searches of a person’s internet activities, and to fund for Planned Parenthood.

“If you compare [McConnell’s record] against the Democrats, there’s not much difference in it,” says Morgan. “He’s been undermining our constitutional rights for many, many years.”

“Everything you know that’s wrong with the federal government today, Mitch McConnell was there and participated in it,” he adds.

Instead, Morgan says he wants to limit government overreach and reestablish the constitutional rights of Americans. He says his political philosophy closely aligns with Sen. Rand Paul and 4th district Congressman Thomas Massie.

Morgan says he was present at the Second Amendment rally at the state capitol over the weekend that ended with Gov. Andy Beshear being hung in effigy. He says he did not join with the attendees who went to the governor’s mansion and hung the effigy, and he pledges to make a statement on his website condemning the actions of those protestors. But Morgan stops short of rejecting the support of people who attended the rally.

“I would want anyone who supports the constitution of the United States to support me,” he says

On the federal response to the coronavirus pandemic, Morgan says Pres. Trump has “done it exactly right” and that he will be proven correct on many of his actions, including taking hydroxychloroquine to ward off infection. But Morgan says he doesn’t think the stimulus packages passed by Congress and signed by the president have gone far enough.

“I don’t know how you shut down an entire country and you don’t even stop the mortgage payments,” says Morgan. “Just think about that: If you can’t generate revenue how are you going to make your mortgage?”

He says the country needs a fourth stimulus package that includes an extension of unemployment benefits and more assistance for small businesses.

During his term as a state legislator, Morgan drew criticism from ethics watchdogs and the media for sponsoring several bills benefitting the liquor industry while he himself was an executive for a local chain of liquor stores. Morgan argues that he was a victim of a political smear campaign.

“Everyone except The Courier Journal thought they were excellent bills,” he says.
“All my bills did for the most part was consumer protection that broke up monopolies and allowed smaller wholesalers to be able to sell products in the state of Kentucky.”

Although McConnell is seeking his seventh term in the Senate, Morgan contends the incumbent can be defeated. He says McConnell suffers from low approval ratings, even among fellow Republicans. And he says Kentuckians need someone in Washington who will protect them.

“You’re not getting that out of the normal politician that’s being elected today,” says Morgan. “I believe that it’s going to take a constitutional conservative who falls in the footsteps of the president.”

Republican Gerardo Serrano is running in Kentucky’s 5th Congressional district. He is a native of Illinois and now lives on a farm in Jackson County. His Facebook page lists him as a conservative constitutionalist who is fiscally responsible and pro-life. He made unsuccessful bids for state representative in 2014 and Congress in 2018.

Serrano contends that Rogers has failed the people of the region, which is among the poorest Congressional districts in the nation. A main point of contention for the challenger is that Rogers voted for the 2018 omnibus spending bill that included money for Planned Parenthood.

“Hal Rogers does not hold on to the principals and the values that we have in the 5th district,” he says. “I would never give a penny to Planned Parenthood, period.”

Serrano also labels Rogers as “the king of pork” who has helped rack up $25 trillion in federal debt.

“I’m not for these omnibus bills,” says Serrano. “Bring the bills one at a time so I can read it and we’ll vote each and every one.”

Serrano says he would vote against a fourth pandemic relief package if it included any funding for Planned Parenthood. He says he supports giving Americans a second round of $1,200 stimulus payments, but he opposes funding for contact tracing of people who test positive for COVID-19. He contends that’s too much government intrusion into the private lives of citizens, and he believes it would be unconstitutional. Finally, he says Congress and state governors should forgo their pay during the crisis.

“I want grandma out there to make her own little hemp oil and see if she can subsidize her Social Security income,” says Serrano.

He also pledges to revive the state’s beleaguered mining industry. He says coal could be converted into fuel for the military.

“It’s a national security issue,” says Serrano. “They need that kind of fuel for our jet planes and some of our other vehicles, and natural gas doesn’t do it.”

Responding to the recent death of an unarmed black suspect after being forcibly pinned to the ground by a Minneapolis policeman, Serrano says all law enforcement officers should wear body cameras. He adds that police should only arrest suspects, not serve as judge and executioner.

“I’m not into the Black Lives Matter thing,” says Serrano. “I think all lives are important and I think if we just focus on our constitutional rights, we should all be very angry about what happened.”

Alexandra Owensby is a Democrat running in Kentucky’s 4th Congressional district. A native of Indianapolis, she took out student loans and put herself through nursing school. She now has a doctorate in nursing and works as a nurse practitioner in neurology at the University of Cincinnati. A single mother of two children, she lives in Ft. Thomas.

Owensby says health care is her top priority. She says Americans must have an affordable system that’s available to everyone, but she doesn’t endorse the idea of Medicare for all. She contends high deductibles, the coverage gap in drug plans, and other issues make Medicare imperfect. She wants a system that offers reasonable copays and deductibles, and that increases funding for medical research.

With the economic turmoil and job losses caused by the pandemic, Owensby says reliable insurance coverage has become more important than ever.

On abortion, Owensby says she supports a woman’s right to choose. She says being pro-life should mean supporting the mother and child before and after birth.

“I absolutely think that we have got to do everything that we can to make sure that situations never get to the point that somebody has to make the decision of abortion,” she says.

On gun control, Ownesby says she would protect the Second Amendment by rejecting restrictions that aren’t based on good science.

“The only way to really respect the Second Amendment is to conduct research as to what causes gun violence,” says Owensby. “We need research to figure out what turns a normal, law-abiding citizen with a gun into a mass shooter.”

Ownesby says she did not attend the Second Amendment rally in Frankfort last weekend, but she says those events tend to attract more extremists than average Kentuckians. She also says it was “reprehensible” that people would hang an effigy of the governor when, in her view, he has worked hard to find common ground among Democrats and Republicans.

She also rejects the claim that Gov. Beshear’s pandemic orders against in-person mass gatherings have prevented people from practicing their religion. She says she attended her church every Sunday during the crisis via online services. As a self-described “strong Christian,” she says church has never been about a specific building.

In his four previous bids for Congress, Massie has won election by margins of more than 27 points. But Owensby contends the district is trending bluer, and she says constituents are tired of what she calls Massie’s extreme and divisive views.

“People are getting really fed up with the status quo and seeing that they’re not being represented,” says Owensby. “What Kentucky need right now more than anything is unity, and I want to be that center voice that brings people together.

Recap of the 2021 Kentucky General Assembly 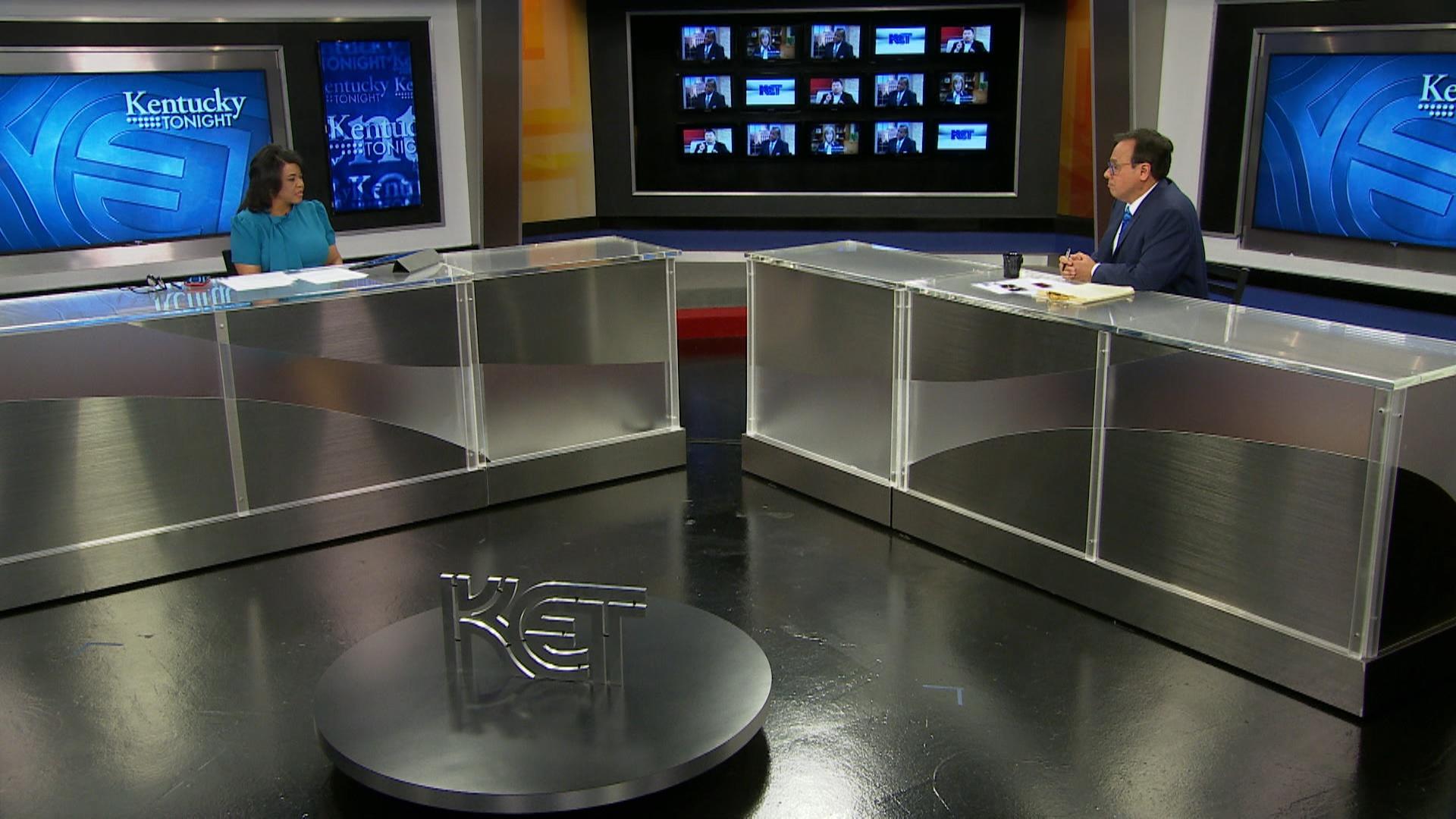