Kentucky Tonight hosted the second in a series of discussions about the 2020 primary elections as Renee Shaw spoke with three Democrats running for the United States Senate. They talked about the protests currently roiling the nation, pandemic relief, health care, and more.

Charles Booker is a native of West Louisville and a graduate of the University of Louisville. He was director of personnel and administrative services for the state Department of Fish and Wildlife in the Steve Beshear Administration. In 2018 he was elected to the state House of Representative.

Mike Broihier served in the Marine Corps for more than 20 years. In 2005, he and his wife retired to a small farm in Lincoln County, where he raises livestock and asparagus. He also has been a reporter and editor for the local newspaper, and a substitute teacher in the county schools.

Retired Marine Corps Lt. Col. Amy McGrath was as a fighter pilot and weapons system operator deployed in the Middle East and Asia. The Kenton County native also worked as a Congressional advisor and a Pentagon liaison. She ran for Congress in Kentucky’s 6th Congressional district in 2018.

In the face of protests and riots across the nation over police killings of African Americans, the three Democrats say more must be done to address racial and social inequities in America. As a black man, Booker says people see him and others like him as a deadly weapon rather than as a human being. He says minorities and poor people feel ignored and abandoned by their government, and that justice is not available to them.

“We need to reform and re-imagine how we engage with policing.” says Booker. “Instead of a militaristic operation, how do we bring more partnership and collaboration into the community and create more accountability?”

Booker says he wants to eliminate no-knock warrants that allow police to enter a premise without announcing their presence. He also would implement citizen review boards that have subpoena powers to investigate questionable police activities.

Broihier attributes police brutality against minorities to the decades-long war on drugs. He contends that’s led police to believe they are at war and that African Americans are the enemies. He also says the law enforcement agencies should be demilitarized.

Broihier also calls for an end to for-profit prisons, the corporate owners of which he says encourages politicians to pass laws to ensure those facilities are filled with inmates. He also thinks the National Guard troops should be pulled from Louisville because he says they haven’t been trained for such situations.

McGrath says there is structural racism in America and that leaders need to listen to the concerns of protestors. She says controversial incidents involving the use of deadly force by police should receive a complete and transparent investigation by outside authorities. She contends political leaders must deescalate civil strife, not escalate it.

“We need to tackle this from a leadership perspective,” says McGrath. “We need to set a command climate where everybody is treated with respect and decency.”

McGrath says the issue is larger than police brutality. As senator, she would pursue better training for police as well as policies to address systemic injustices that underlie American society.

McGrath, who describes herself as pro-Second Amendment, says lawmakers should pass gun laws that most gun owners and non-owners can agree on such as stronger background checks. She says the U.S. Centers for Disease Control and Prevention and the National Institutes of Health should be allowed to study gun violence as a public health issue, and she calls on the Senate to reauthorize the Violence Against Women Act, which includes “red flag” provisions that would disarm domestic abusers.

Booker, who has lost a relative to gun violence, joins the call for stronger background checks and red flag laws. He also wants legislators to close the so-called “Charleston loophole” that allows people with criminal records, mental health problems, or other issues to purchase a weapon from a licensed dealer if the FBI fails to complete the required background check within three days.

The three candidates say the federal government needs to provide more relief to Americans suffering under the economic devastation caused by the COVID-19 pandemic.

Broihier says he would give every American adult a $2,000 monthly relief payment plus $1,000 a month to every child through the pandemic period and the recession he says will likely follow it. He also supports a universal basic income (UBI) thereafter of $1,200 a month for adults and $400 for children. Broihier says direct payments to citizens make more sense than subsidizing corporations that will use federal dollars for stock buybacks and executive benefits.

“If you give money to people, to the middle class, to the working class, the working poor, they spend that money,” says Broihier. “They spend it locally and it develops tremendous velocity, and it gets spent over and over and over.”

He contends that UBI is not a disincentive to work, and he says it would help Kentucky farmers give up their off-farm jobs and focus full-time on agricultural endeavors. Broihier also supports massive infrastructure investments to make Appalachia into a green energy hub for the eastern U.S.

Like Broihier, Booker calls for continued relief payments to Americans of $2,000 a month per person. He says the federal government should also cancel rent obligations and provide relief to landlords, erase student debt, and ensure that coronavirus vaccines, once they become available, are free for everyone.

Going forward, Booker calls for a $15 per hour minimum age, greater broadband internet coverage, a focus on sustainable jobs and housing, and funding for struggling communities like his West Louisville neighborhood as well as the small towns of rural and Appalachian Kentucky.

“We need to invest in people, we need to break down barriers to opportunity, and we need to provide an equity stake in the economy that we have busted our butts to build,” says Booker.

McGrath says the next federal relief package should include funding for state and local governments to help pay for school systems, infrastructure, and first responders. She criticizes incumbent Sen. Mitch McConnell for supporting relief for big businesses and special interests but not for struggling state and municipal governments. She also calls for additional money for personal protective equipment and hazardous duty pay for health care workers.

To rebuild the economy in the future, McGrath supports a gradual increase of the minimum wage to $15 per hour, stronger labor unions, and more investments in education, workforce development, and internet and cell phone coverage.

“No business is going to want to come to a county in Kentucky that cannot talk to the modern world,” says McGrath, “and that’s what we see [in] a lot of places around the commonwealth,”

McGrath says health care should be affordable and accessible to all Americans. But she opposes Medicare for all because she says people shouldn’t have to give up coverage that they like. She proposes a public option, which she says would help reduce premiums. She also wants to lower prescription drug prices and tackle the opioid addiction crisis.

Booker supports Medicare for all, saying that healthy people are better able to complete their education and be gainfully employed. He also wants to invest in rural hospitals.

Broihier calls for a single-payer health care system, but until that that can be built, he says Medicare coverage should be available to anyone who wants it.

All three Democrats say they support a woman’s right to make their own reproductive health decisions. Broihier says he would oppose any judicial nominee who disagrees with the U.S. Supreme Court decision in Roe v. Wade. Booker says he’s spoken for reproductive justice and maternal health care issues in the state legislature. McGrath says personal decisions should stay within the family, and that she is not for late-term abortions and never has been.

Charting a Path to Victory

McGrath says she will work with and stand up to any president, regardless of his or her party. She also criticizes Sen. McConnell for not working with President Donald Trump on issues that will help Kentuckians, like lowering prescription drug prices and fixing infrastructure.

But Booker disagrees with the strategy of trying to be a better version of the incumbent Republican.

“When you understand the challenges that Kentuckians face, you don’t run as a pro-trump Democrat, says Booker. “You’re not going to convince folks that supported Donald Trump to vote for you because you’re not as bad as Mitch McConnell.”

He says Kentuckians need a leader who will speak with moral clarity and not back down on issues. They may disagree with you, Booker says, but they will respect you.

Broihier says centrist candidates who oppose McConnell get “creamed every time.” He says Kentucky needs progressive, transformational leaders who can provide a path to a better future, not someone who is “a little less worse” than McConnell. He also wants Kentuckians to understand the impact of the judicial appointments that McConnell’s Senate has confirmed. 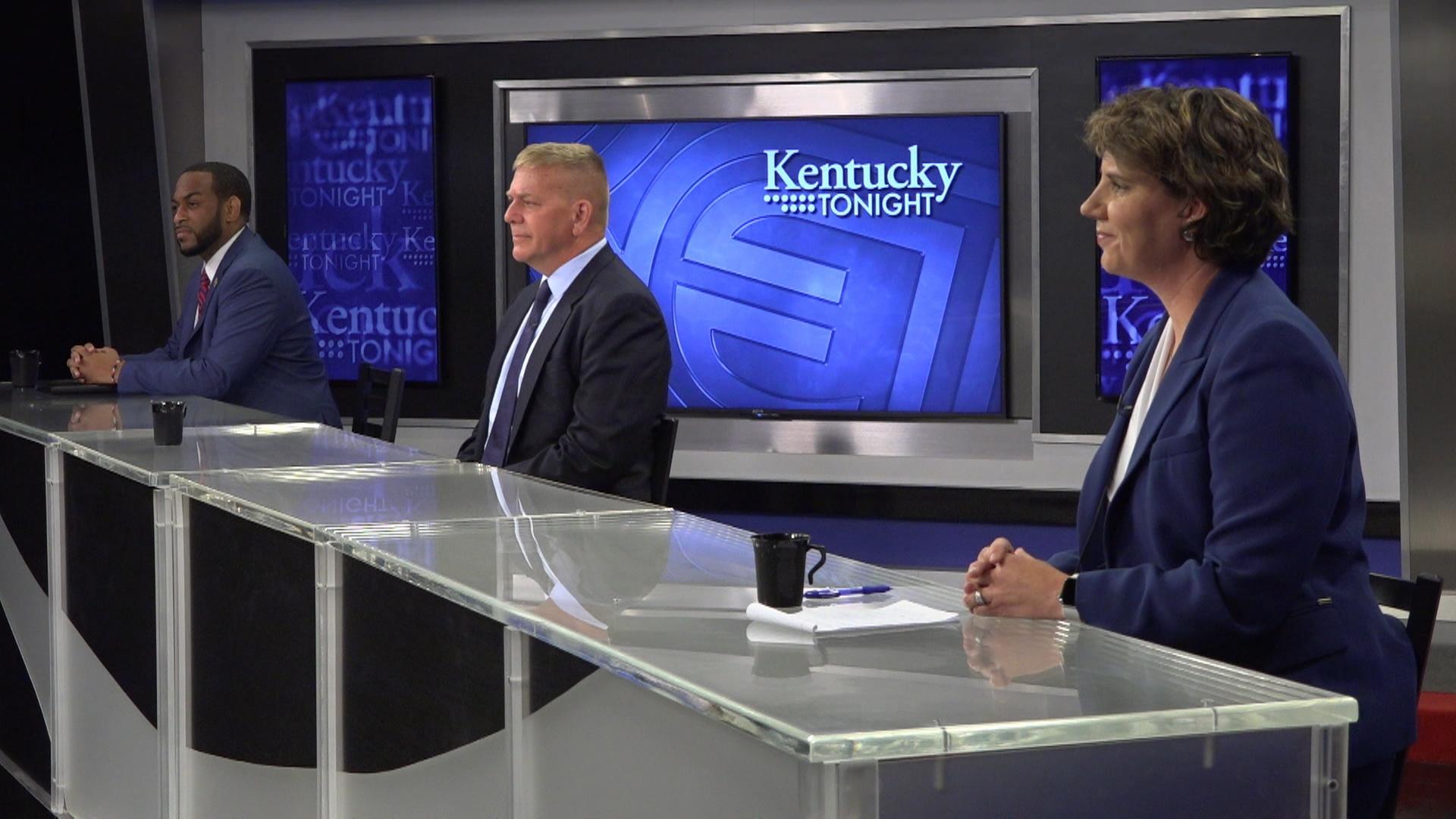