Debating the Best Path Forward for Kentucky's Economy in 2021

At the start of 2020, the state and national economy was humming and key indicators were trending in positive directions.

Then COVID-19 hit, resulting in shuttered businesses, millions of job losses, and a steep dive in the stock markets.

Now as the nation heads into year two of the pandemic, there is hope that the newly approved COVID vaccines will help get the coronavirus under control and enable Americans to return to some semblance of life as it used to be.

“There are hopeful indications that after... we start to see the cases really decline that some activity will go back to normal,” says Jason Bailey, executive director of the Kentucky Center for Economic Policy. “But we have a ways to go and there’s also going to be a lot of pain between now and then.”

That includes economic hardship. After starting the year with about 3.5 percent unemployment, Kentucky’s jobless rate jumped to nearly 17 percent in April. As the economy started to recover this summer, the unemployment rate dropped, and now sits at 7.4 percent as of October.

What’s worse is that many of the sate’s unemployed have stopped looking for work. Kentucky Chamber of Commerce Vice President of Public Affairs Kate Shanks says the commonwealth has long been in the bottom tier of states in terms of workforce participation. Thanks to the pandemic, Kentucky dropped from 40th to 49th. She hopes that as employment rebounds, workforce participation will also improve.

“We’re not out of the woods yet,” says Shanks. “We have got to get policy right in the next few months when our General Assembly is in town... in order to make sure that our economic recovery is in step with our health crisis recovery.”

The pandemic-related layoffs and furloughs have hit the state’s poor and working-class families especially hard. Kentucky Youth Advocates Executive Director Terry Brooks says food insecurity among children has increased since the pandemic, and 20 percent of families fear they won’t meet their mortgage or rental payments next month. While the COVID vaccines have given Americans much-needed hope, he says the coming months will require caution, discipline, and sound public policy.

“I think there is a litany of good ideas that we can see enacted in the 2021 General Assembly that will act as a catalyst to spur the economy and at the same time be helping the most vulnerable of Kentuckians,” says Brooks.

Child care is at the top of Brooks’ policy list. He says half of Kentucky families live in a child care desert, which makes it difficult for parents to hold jobs and find someone to look after their children during work hours.

Early child care is also a priority for the Kentucky Chamber. Shanks says that it is a workforce issue and an education issue to ensure that children spend time in an environment that stimulates quality learning.

Lack of child care also raises gender equity concerns. Shanks says with so many child care centers and schools closed during the pandemic, it’s often women who step away from their outside jobs to look after their children.

The Chamber wants the state to help increase child care resources for parents through more licensed facilities as well as more in-home and at-work options.

Another challenge is kinship care in which a person raises the child or children of a relative. Brooks says Kentucky has more kinship families than any other state in the nation, about 77,000. He says the commonwealth’s kinship system makes it difficult for caregivers, two-thirds of whom are under 60 years of age, to participate in the workforce.

Brooks also says criminal justice reforms would help reunite low-level offenders with their families and get them back into the workforce. He says there are 13,000 parents serving time in Kentucky jails and prisons for some of the lowest of offenses.

Two Views on Growth and Taxes

Tax policy is at the heart of a new report from the Bluegrass Institute for Public Policy Solutions. “The Lost Decades” explores how Kentucky has underperformed over the last 40 years compared to other states.

“In 1980 Kentucky was essentially as wealthy as North Carolina and Tennessee, but since 1980 their growth has far exceeded Kentucky’s,” says Andrew McNeill, a visiting fellow at the think tank and author of the report. “Those states have really embraced... economic freedom and limited government. Kentucky has been really more in the business of progressive redistribution and that has led to a certain stagnation in the growth.”

Progressive redistribution, according to McNeill, is where a state government takes the revenues garnered from high tax rates and redistributes it to favored political constituencies.

Under Republican leadership in 2018, the Kentucky legislature passed a tax reform package that lowered corporate and individual tax rates and applied the sales tax to more services. Those changes were projected to raise $500 million in additional revenues for the state over the next five years. McNeill argues that sound tax policies must be revenue neutral and cannot favor special interests over individuals and entrepreneurs.

“You can’t call something pro-growth [if it’s] intended to raise revenues,” he says. “So revenue neutrality has to be the first principal of tax reform going forward in the state for us to be competitive.”

“It is time to evaluate programs for their effectiveness,” says McNeill. “It is time to determine whether or not those dollars should be continued to be spent in these programs or can they be reallocated to more important priorities.”

Bailey says transparency and evaluation of government programs are good goals, but he says that shouldn’t lead to further cuts to services that are already woefully underfunded due to 20 state budget reductions since the 2008 recession. He says those cuts have undermined critical government services like education and infrastructure that he contends are fundamental to growth and prosperity. Bailey also argues that the 2018 tax cuts will further slow the rate of revenue growth for the state.

“What we need to do is go back to what we had for 100 years and what the majority of states still have, which is a graduated income tax that asks more of those who have more,” he says.

If tax policy were required to be revenue neutral, Bailey argues, there is no way the state could collect enough money to make up for the cuts endured over the last decade. He also says that states with the highest marginal tax rates on the wealthy perform better in gross domestic product per capita, average income growth, and unemployment. Bailey says even North Carolina, a state cited by McNeill as outpacing Kentucky, was able to invest in education and infrastructure because it had the highest income tax rates in the South until recently.

Bailey further adds that Kentucky has suffered economically not because of a progressive redistribution of wealth but because of a legacy of extractive industries like coal mining that have taken wealth out of the state.

Other Options for Promoting Growth

In addition to restoring a graduated income tax, Bailey also advocates for a gradual increase of the minimum wage to $15 an hour. He says that would raise the wages of 625,000 Kentuckians and lift the economy of the entire state.

“That’s the kind of economic development policy that you actually see in the most prosperous states,” says Bailey, “but it’s the kind of thing that we’ve neglected.”

But with Republican supermajorities in both chambers of the legislature, that’s unlikely to happen. Shanks says the Kentucky Chamber also opposes a mandated wage hike for Kentuckians.

Shanks contends Kentucky is on the path to growth thanks to a robust manufacturing sector, the 2018 tax overhaul, changes to workers compensation, passage of a right-to-work law, and repeal of the prevailing wage mandate. But then the pandemic stalled that growth, she says.

For the new year, the Chamber’s policy recommendations include creating a healthy, educated, and skilled workforce; encouraging knowledge-based entrepreneurship; and building a modern infrastructure. She says if employers don’t think they can grow here, they’ll look to locate in other states like Tennessee.

“We need to bring people to Kentucky and people to realize that Kentucky is a place for opportunity, where you can have really great quality of life,” says Shanks. “By becoming more competitive, what we’re doing is attracting more jobs to our state, more investment, and we are growing our population.”

One tax increase the Chamber endorses is a hike in the gasoline tax to help fund state and local road projects. Shanks says that it is a revenue measure that keeps the state competitive and grows jobs.

Even if it’s marketed as a “user fee,” McNeill says a gas tax increase is unnecessary when the state already spends $1.5 billion a year on road projects. Plus, he argues it hurts low-income families at a time when they’re already struggling to make ends meet. 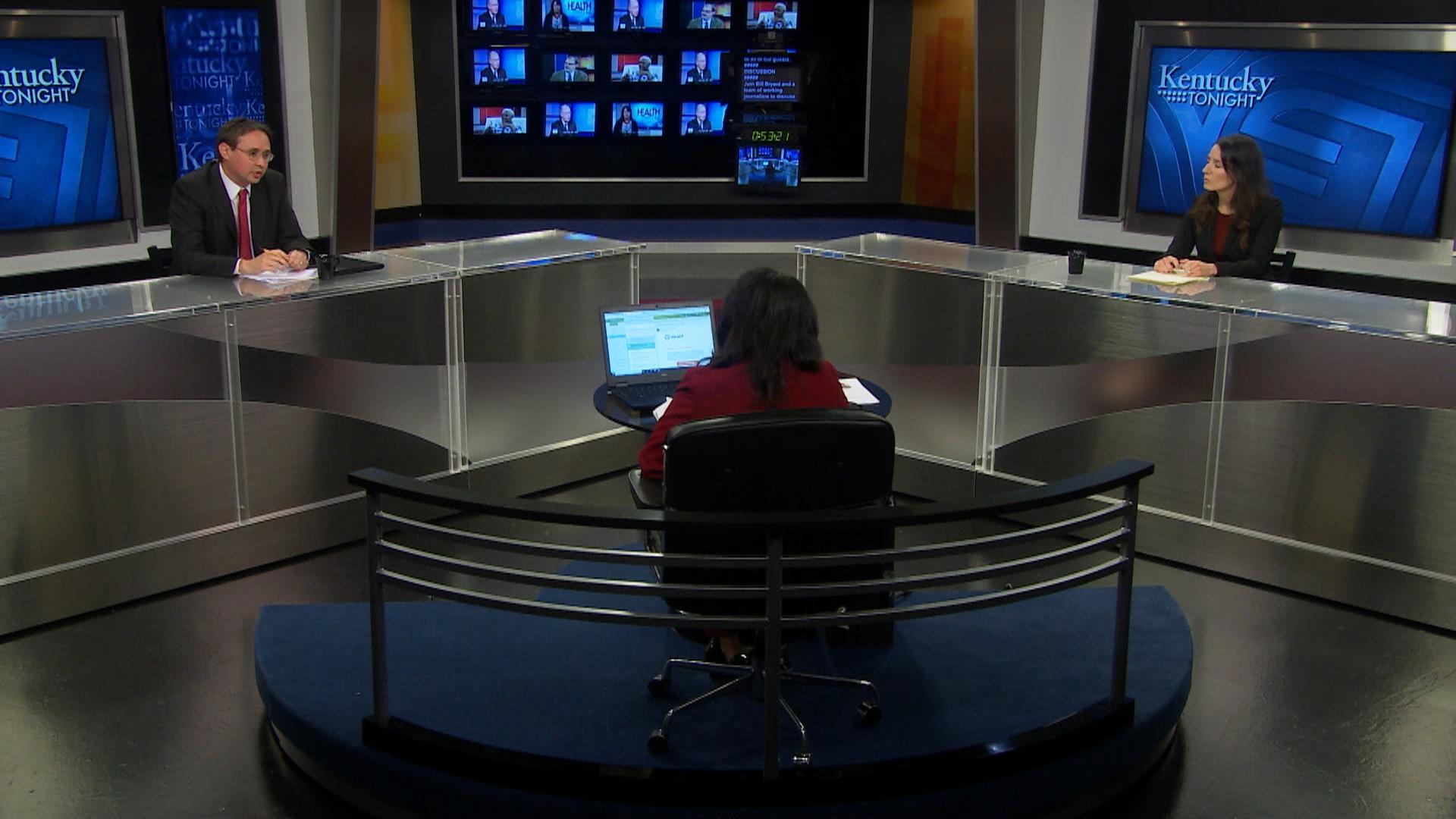